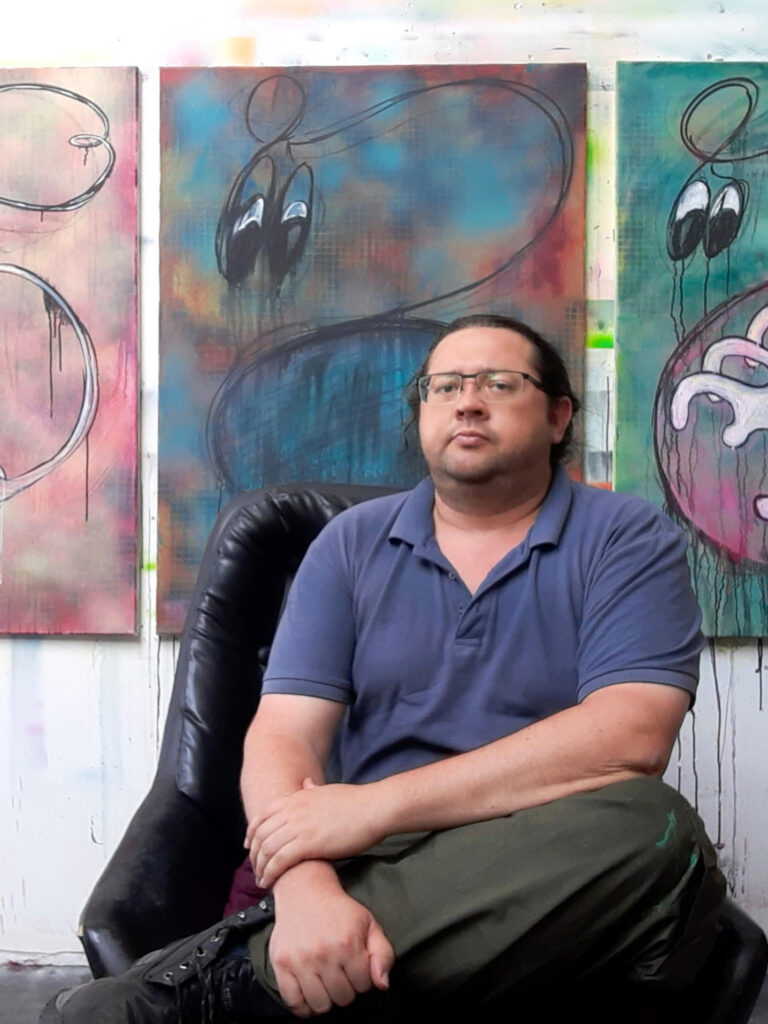 Alexander Small‘s practice explores ideas of the Trickster as an archetype and how these are represented in visual culture. The trickster mythos includes characters such as Puck and Bugs Bunny with themes around these often including boundary-breaking and liminality. Taking cues from found imagery including the ‘poor images’ of the web, diagrams, photographs, scans of prints and cartoons I play with taboo subjects and repressed experiences. Acting in the vain of ‘trickster’ I seek to re-present a visual language mocking bodily functions, questioning gender and making jokes about genitals, philosophically working towards a ‘metaphysics of shit’. Painting tropes are employed in a variety of ways joke abstraction, faux expressionistic gestures and uneven airbrushing lay bare the mechanics of the medium.

The work explores the visual culture of the trickster archetype. The Unbinding Triptych includes an image of Puck, hands breaking chains, and a taper unravelling. All these images refer to various undoings and unbindings. The images are painted across the edges of three separate canvases and can be placed in a variety of ways to produce the images or part images depending on the combination. The three canvases also have an expressive serpentine line or ‘line of beauty’ connecting the three canvases in one of the combinations. This work refers directly to the tarot deck of Austin Osman Spare as presented by Jonathan Allen at the 2016 conference and was made in response to that encounter. Corvus (Setting in motion this world of endless hunger) is a video piece showing a scavenging crow pecking at a bag of excrement in an open suitcase surrounded by used cups, discarded clothes and refuse. Here the crow a trickster symbol echoes the Tsimshian Raven cycle where a desire to escape the devouring of appetite is explored.

The metaphysics of shit : A selection of recent paintings

Referring to Jean Fischer’s 2002 essay ‘Towards a Metaphysics of Shit’ this series of paintings examine ideas of the trickster not only as a potent symbol of the liminal state but also as a method for realising its re-creative potential. Using historic images as a starting point particularly images from European wood block print imagery portraying themes of defecation, time and de-individuation these images are re-presented as paintings. This process of translating the image from one media to another is an absurd act in itself, mocking both systems of representation known as painting and print.

Generally Alexander’s work occupies the space between ideas of the Dionysian and the Absurd, moving from one to the other exploring themes of futility, pointlessness, hopelessness, nuisance, de individuation, death, rebirth and the irrational.