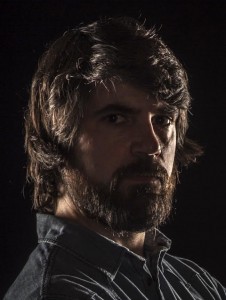 Carlos Ruiz Brussain is an artist and a lecturer. His practice is in the fields of drawing, illustration, concept art and painting. He lectures in illustration, creative methodologies and creative techniques at ERAM Escola Universitaria-University of Girona (Spain). He is a PhD candidate at the University of Northampton. He holds a Master’s degree in Design from the University of Lincoln (UK) and a Postgraduate Diploma in Art Therapy from the University of Girona. Since 2012 he studies creative writing at Escuela de Escritura Ateneu Barcelonés. He is a member of the following associations: APIC (Associació Professional d’I·lustradors de Catalunya); the Teaching Innovation Network: Play and Learning (University of Girona); the research group Play and New Technologies Applied to Teaching Innovation (ERAM – University of Girona); ARAS (the Archive for Research in Archetypal Symbolism); and the Drawing Research Network. He is a board member of Monad: Journal of Transformative Practice. He is a practitioner of transcultural shamanism.

In Jungian psychology, the shadow is the unconscious or unacknowledged part of a person that is excluded by the conscious side. Thus, it could be said that it represents the archetypal forces of darkness and evil; mainly because it is composed of uncivilised drives, repressed wishes, morally inferior impulses, obscure desires, infantile resentments, regressive fantasies, etc. These underdeveloped attitudes that spring from undifferentiated states of consciousness are generally rejected as irrational, immoral, unattractive, antisocial and they are substituted with other thoughts and actions that coincide with collective expectations: socially accepted values and patterns of behaviour, which, in turn, are consistent with the conscious principles that define the ‘persona’ (the mask one wears in social life that condenses the ideal aspects of oneself). However, the shadow should not be refused, as it is a powerful source of creative inspiration, renewal and intrinsic motivation.

This paper explores how shadow-work could be utilised in creative practice. Drawing from C.G. Jung’s concept of the transcendent function, my approach basically consists in using negative feelings and memories as the starting point or prima materia that enables me to direct psychic energy from one level of consciousness into another. This flow of psychic energy is achieved by means of images loaded with affect that work as emotional containers, which eventually transform into new symbols. In order to lower defence mechanisms that allow the manifestation of raw psychic material, I employ techniques such as dreamwork, active imagination, shamanic journeying and ludic activities. I mainly use this method in painting, drawing, authorial illustration and creative writing, but I will also discuss how it could be applied to other creative fields.

Within the Hyperdream Magic Circle: Manifesting the unconscious through illustration play and games

During the last decades a number of academic studies explored the relationships between play and creativity (Winnicott, 1971; Csikszentmihalyi, 1975; Landau, 1984; Martin and Bateson, 2013).

Still, the link between play, creativity and magic; the thought processes involved; and, the creative rituals that predispose artists for their “shamanic journeys” has been almost neglected. Beyond the isolated cases of A. O. Spare, X. Solar, and J. Pollock, Dadaists and Surrealists were the most important antecedent in the conjoint practice of the three disciplines but, even there is some literature on their ludic activities (Brotchie & Gooding, 1995; Laxton, 2003; Dickerman, 2005; Malone et al., 2009), and some that analyses the link between both avant-gardes and magic (Balakian, 1971; Choucha, 1992; Warlick, 2001; Moffitt, 2003; Rabinovitch, 2003; Lepetit, 2012; Bauduin, 2012), formal investigation about the relationship between games, magic and art is scarce. Additionally, fantasy thinking and rituals cannot be separated from ludic nor magic activity, but within the arts they have not been studied with the attention they deserve.

My practice-led research analyses the development of a play-based creative framework for visionary and fantastic illustration practice. It is inspired by the world of dreams, reverie states, and fantasies and explores how fantasy thinking might be increased by the use of active imagination and play dynamics for their value as motivators for creativity. It encompasses different ludic approaches, techniques, and tools designed to provoke motivation through randomness and unexpectedness, which allows the emergence of raw archetypal and symbolic material.

I have been using Surrealist games, the theory of flow introduced by Csikszentmihalyi, and depth psychology as key references.

In conclusion, I argue that the thought processes involved in the creation of visionary and fantastic illustration should be related to fantasy thinking, which can be provoked by playful activities practiced as magical rituals.