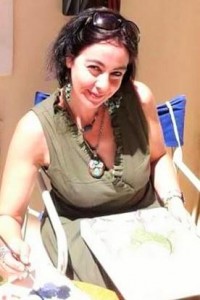 Image and Logos: Symbolic Vocabularies and Inspired Revelations Through the Eyes of Joséphin Péladan

I am a historian of culture, a professional artist, an author, and gallerist. My work experience includes international academic and cultural event organisation; various roles within academic publishing; investigative and cultural journalism; international exhibitions, lectures, teaching, and publications. I am currently (March 2018-) serving as Managing Editor for the Journal of Bodywork and Movement Therapies, while running two galleries and developing my own art and writing projects.

As an artist I have held 13 solo exhibitions in Greece, Sweden, and the UK, and participated in group shows in Spain, Greece, and the UK. I have published widely on Peladan, and lecture frequently at international academic and cultural institutions and conferences.

Image and Logos: Symbolic Vocabularies and Inspired Revelations Through the Eyes of Joséphin Péladan

Occult visionary author Joséphin Péladan (1858-1918) dedicated his life and prodigious literary output to his attempt to provoke a collective social awakening through the display of symbolist artwork and production of symbolist literature on a massive scale. He produced copious theoretical tomes explaining the esoteric theory that underpinned both his motivation and his guidance to members of his audience seeking a gnostic awakening. Although notorious for his eccentricity, his influence reached as far as South America and influenced literary and artistic circles in several European countries. Despite being forgotten for the best part of the 20th century, recent years have seen a revival of interest in Péladan and attempts have been made to  provide a deeper understanding of the purpose of the Salons de Rose+Croix that were his brain-child.

After summarising both the context and the specifics of Péladan’s worldview, aims, and modus operandi, I will discuss the syncretic framework upon which his vision was built and explore the questions of how this was meant to work in practical terms. He combined Orphic Mysteries, Aeschylean tragedy, Scripture, and Enochian revelation, perceiving humanity as the epicentre and deciding force in the Platonic attempt to emerge from the cave of darkness. In a surprising twist on Platonic thought, he used the arts in their entirety to approach the world at large, convinced that in so doing, a deeper human impulse would discover its celestial heritage. Although the results of these attempts were undoubtedly mixed, on an artistic level in particular, Péladan influenced many artists to produce work inspired by these notions. The unwavering goal was to spark a form of revelation in his contemporaries. It is the shape, content, and mechanism of that revelation that this talk will explore.

Saving the lives of angels: Joséphin Péladan’s Vision for Redemption Through the Arts

During the artistic explosion marking the Parisian Belle Époque, the Salons de la Rose et Croix (1892-1897), though short-lived, were perhaps one of the most ambitious artistic undertakings seen by 19th century French art world. They sought to unite the arts into a revival of initiatory drama, with philosophical foundations rooted in Western occultism and idealist thought.

The Salons were the brainchild of one of the enfants terribles of the French Occult Revival; esoteric philosopher and author Joséphin Péladan (Sâr Merodack, 1858-1918), a key figure in the inception and development of fin-de-siècle French Symbolism. His ultimate goal was a revolution against realism and the re-enchantment and spiritual regeneration of what he saw as a disintegrating and decadent society. Influenced by Platonic philosophy and Luciferian theology, his grand vision comprised an imaginal world in which artist-initiates would form the inner circle, designed to ignite a collective awakening in society and replace religion with art. The artist-initiates would raise the souls of the masses to ecstasy through aesthetic bombardment with symbolic images that would simultaneously stimulate the intellect and the soul. The ultimate end of this awakening would be restitution for the Fall of man and angels through human creativity.

Péladan’s work attempts to dissolve boundaries on several levels. He broke with esoteric “secrecy” and published self-initiation manuals proclaiming his message; he used every artistic communication channel available to disseminate his message; inspired scores of artists to take up his cause; and produced a vast literary oeuvre to support and explain his philosophy. Very much the product of his time, his work reflects the birth of Modernism and the growing social turmoil during the early 20th century.

After a brief introduction to Péladan’s life and times and a contextualisation of his core message, this paper focuses on his concept of the role of art and artists and their power to effect individual and social change according to his esoteric-aesthetic philosophy.

One of Péladan’s key premises was that art should speak to both the intellect and the soul, spurring viewers to cultivate their understanding of the underlying symbolic messages, and to grasp esoteric truths that could not be as effectively expressed in words.

This collection of original oil paintings by Sasha Chaitow, created especially for the Trans-States Conference, illustrates key esoteric concepts from Péladan’s work that are also discussed in the conference paper. Using Peladan’s own symbolic stories and concepts, she builds symbolic compositions encapsulating various aspects of his esoteric philosophy, demonstrating how he intended art to become a portal into self-awareness and esoteric awakening.