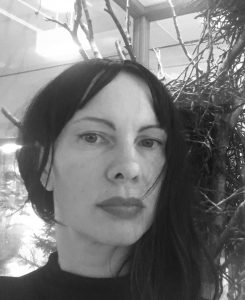 Ritual as Resistance: On the Performative Hierophanies of Revelation

Geraldine is an interdisciplinary British artist based in Stockholm, where she plays an active role in various artist collectives – most recently the ecofeminist magickal aktivist group NKK, who have performed rituals both publicly and privately in various institutions in Stockholm.

Her curatorial practice in Stockholm began with founding the experimental art  space Konstapoteket, whilst curating at various Swedish organisations, including Fylkingen, a venue for new music, performance and intermedia art, where she now also co-curates the biennial Art & the Esoteric symposium,  Conjuring Creativity.

Within her own practice she is participating specifically at the intersections of site, myth, psychological topographies, otherness and the visceral experience of the magickal body. Drawing from initial psychogeographic projects after her masters in 2006, her work has gradually evolved into a hybrid of her personal magickal praxis and her obsession with site/place, heterotopias and hierophanies.

Her methodology includes sculpture, printmaking/artists books, analogue photography, sound art and performance, which takes the form of  ritual … with the artefacts left behind becoming the future signifiers of event, allowing for an archaeology of transgression to emerge.

Ritual as Resistance: On the Performative Hierophanies of Revelation

If the time is now ripe, for the witch to come forth, unabashed and whole, not as a player within the Abrahamic dichotomy but as a fully instinctual visceral being, then the time is now for the rite to manifest within the public realm.

Within my artistic practice, through the medium of performance, I strive to bring the occurrence of ritual into a contemporary art arena, neither as entertainment, nor within the realm of popular occulture, rather as progressive manifestation, a catalytic channel for personal/public empowerment, a source of vitalization where the lines are crossed between performer/performance and participatory experience – the art in itself being a charged magickal event, whereby, in using active conjuration within a public space, myth and archetype are enabled to enter the now.

It is within this framework that the praxis of the female artist/witch is presented, in relation to the practice of consciously re-wilding (psychologically, spiritually and physically) in symbiosis with an understanding of revelation, insofar as ritual performance is of itself an initiatory, phenomenological, visceral/empirical example of gnosis. Furthermore, an external, as well as internal, re-wilding needs to take place in order for the old world to truly crumble, a performative causality, resulting in a heterotopia of the psyche (in relation to a physical hierophany) within which the possibility of magick – as a verb rather than noun – can take its rightful place in an ethnodiverse society.

With this, I propose that the renaissance of witchcraft in contemporary cultural crossovers – both here in Europe and transatlantically – is to be acknowledged as a collective, consciously unconscious rallying call of resistance, that can be interpreted as a rhizomic and deeply powerful, intuitive movement which cannot be rationalised.