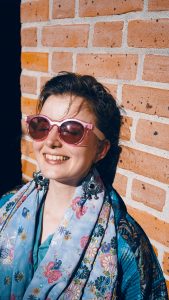 Reading the Akashic Records, Intermodal Exchange, and Practices of Energetic and Emotional Transformation

Anne O. Parker-Perkola completed her M.A. and is now pursuing her PhD at the Rice University Department of Religion in Contemplative Studies with a sub-focus in Buddhist Thought. Her dissertation, “Precious Jewels, Living Lights: Two Case Studies in Charisma and Hagiography in Medieval France and Tibet,” focuses upon charisma and the routinization of charisma in monastic, literary community, drawing upon the works and the hagiographical legacies of Bernard of Clairvaux, the Mellifluous Doctor, and Longchenpa, Drimed Ozer—Stainless Light.  Her poetry was first published by Wings Press as the chapbook Remembrance of Rain, and has since appeared in other, local periodicals.  She received the Marion Barthelme prize for her short poetry cycle Watersong. Her advisors are Dr. Claire Fanger and Dr. Anne Klein.  She reads the Akashic Records in the manner transmitted to her by Nancy Kern, and she is a student of Scaravelli yoga as taught by Diane Long and Robert Leonard.

Reading the Akashic Records, Intermodal Exchange, and Practices of Energetic and Emotional Transformation

In Pre-Object Relatedness, Ivri Kumin argues that certain aspects of the psychoanalytic situation require something more than classical object relations to explain.  In this lacuna, which he names pre-object relatedness, he includes such phenomena as the somatic, sometimes even telepathic connection between analyst and analysand, the connection between a mother and her fetus in utero, and the resonance present between a mother and her child both present in analysis.  In reading the Akashic Records, albeit in a situation outside of the psychoanalytic container, I have discovered a similar type of connectedness, a kind of intersubjectivity based on relations with forces, energies, beings, and somatic phenomena that, while they are not fully internally represented, are also not entirely non-representational.  These experiences are embodied and energetically intense, and in them I have become open to possibilities of mutual relationship with myself and other spiritual forces that are neither the transcendent unification and loss of self usually associated with classically mystical states nor the total separation between self and other that is casually assumed to characterize our more ordinary states. In this paper, after providing a brief introduction to the Akashic Records and Kumin’s theoretical model, I provide a phenomenological account of reading my own Records and argue that the kinds of experiences I have in the Records closely resemble those events Kumin describes as intermodal exchanges, a subset of the phenomena he examines in Pre-Object Relatedness. I then provide examples from Tibetan and medieval European accounts of spiritual experiences to further contextualize both the experiences I have in the Akashic Records and those experiences Kumin describes as intermodal. I will conclude by reading a poem that evokes and expresses, rather than merely describing, an Akashic state.