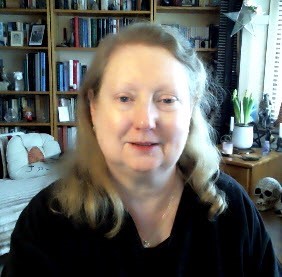 Following a 25-year career in business analysis and training consultancy, Deja Whitehouse returned to academia in 2016, completing her PhD at the University of Bristol under the supervision of Professor Ronald Hutton in January 2020. Her thesis, In Search of Frieda Harris, explores various aspects of Harris’s life in comparison with some of her female esoteric contemporaries.

During her studies, Deja was engaged by the Warburg Institute to catalogue Frieda Harris’s correspondence. Since being awarded her PhD, she has published various papers and book chapters and continues to present her research both in person and online. She is currently working on a monograph based on her PhD thesis for OUP’s Oxford Studies in Western Esotericism.

Paper Presentation – ‘The Abominable Mercury’: an Analysis of Frieda Harris’s Anthropomorphised Concept of the Trickster God

In order to fulfil Aleister Crowley’s commission to illustrate his Book of Thoth, Frieda Harris became his magical pupil, working her way diligently through the grades of the A∴A∴. Her studies were blended with her work on the Tarot paintings during the course of which Harris developed a deeply personal relationship with the god Mercury.

This talk will explore the evolution and manifestations of Harris’s relationship with the Trickster God and assess its impact on the creation of the Magus card, her personal life and her magical development.

For sixty years Harris conducted herself as she laughingly described ‘an exceedingly well-bred & bourgeoise [sic] lady with all the nice instincts of that section of Real Life’ To counter the societal expectations of ‘Lady Harris, the wife of the Right Hon.’ she created her alter ego, Jesus Chutney, first adopted when she was mingling with Surrealists in 1920s Paris. Used initially as an alias when exhibiting her paintings, Jesus Chutney became her independent bohemian identity, in correspondence, other writings, and even the telephone listing for her Richmond studio. Harris’s playful sense of humour was not always appreciated by Crowley, especially in matters magical and she would sometimes employ ‘J.C.’ to convey serious issues amusingly to deflect a potentially hostile response. One such example is a letter in which she claims her delay in working on the Magus card is because ’J.C… has embroiled himself with a person called Mr. Mercury.’

As this lecture will argue, her anthropomorphising of Mercury, both as a manifestation in her everyday life and as the source for the Magus card caused genuine concern to Crowley who believed ‘of all the Gods, Mercury is the easiest to offend, the hardest to propitiate.’

Frieda Harris and the Divine Giraffe: Frieda Harris’s Esoteric Journey and its Influence on Her Artwork

Frieda Harris is best known for her collaboration with Aleister Crowley on The Book of Thoth, and her incredible Tarot paintings that accompany the work.  Nevertheless, it has to be understood that Crowley commissioned Frieda to carry out the work in accordance with his specific requirements.  In Frieda’s own words: ‘The Tarot Cards were a map of inquiry but they did not satisfy me.’[1]

This talk will explore what Frieda meant by this and how she expressed her own spiritual vision in her artwork.

As the wife of a Liberal M.P., it is remarkable that Lady Harris should risk her social standing, her reputation and her marriage by involving herself with someone already designated ‘the wickedest man in the world.’  Whilst conforming outwardly to the social conventions expected of an upper middle-class wife and mother, Frieda enjoyed comparative freedom to pursue her personal interests, especially her painting, actively encouraged by her husband.  By the time Frieda met Crowley, she was already sixty years old, and established as an accomplished artist, exhibiting under her own name and that of her Surrealist alter-ego, Jesus Chutney. She had also read extensively on a wide variety of esoteric subjects and was familiar with Greek mythology and British folk stories.  Crowley was the catalyst that enabled her to bring all these diverse strands together and I believe the Thoth Tarot was the first instance when Frieda intertwined art and esotericism in her paintings.

However, as will be argued in this talk, Frieda’s spiritual journey both pre- and postdates Crowley, in what she described as ‘my task of finding a satisfactory God.’[2]