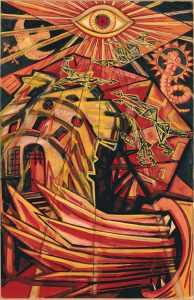 Living in a Space that Lives Within Us

Petra Szilagyi is an artist and student of the Super Natural. The product of a nomadic Afro-Caribbean/Hungarian, Petra has travelled from Japan, to Nigeria and many places in between, in a calling to seek the inexplicable, the unquantifiable and rich anti-structure spaces. They received their BA from Williams College and are current living in Richmond working on their Master’s degree in Sculpture from Virginia Commonwealth University.

Umico Niwa (b.1991 Japan) is enrolled in the Sculpture + Extended Media Graduate Program at Virginia Commonwealth University. Her work is based on speculative science and is currently researching the possible efficacy of utilizing fecal matter transplant procedures as a means of hormone replacement therapy for transgender individuals.

Living in a Space that Lives Within Us

The Chick House is a meticulously constructed dollhouse made of mud and horse feces, for the comfort of four baby chickens. Formally, it is a proposition for utopian residential architecture inspired by nature oriented ontologies of permaculture and feng shui. The piece utilizes cognitive development techniques emphasizing the use of miniatures as tool for personal reparenting, while proposing a solar-punk future cohabitation scenario between a Japanese transgender woman and her black non-binary partner. Meanwhile, we speculate on the agency of Chick House itself. Were we drawn by a symbiotic microbiotic pull wherein our microbiota was acting through us to establish an exchange with the microflora within the local soil and equine population? Could Chick House in fact have proposed itself as a transmission from our future selves, a retro-causal hypersigil? Perhaps, it was a cloaked mandate for a temporary home by a species of tiny Strieber-esque interstellar light beings operating on our deepest subconscious spaces. This object, this entity, clearly has a life and attributes beyond us, and it continues to challenge our understanding of how objects and ideas circulate in space.

While Chick House has been dismantled, it exists in its ecological components in near identical (not chemically altered) states long before and after its installation.

Conceptually, the piece ‘lives’ in Southern Spain in a sort of a-temporal speculative space. Most poignantly, it operates transtemporally on our notions of being as it continues to rewrite our personal narratives around childhood, midlife and death, and scatters our sense of personal subjectivity as it invites the experiences of the baby chickens, the soil and manure, the elements and any other entities and streams of consciousness to contribute.