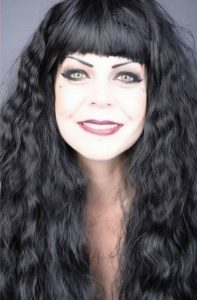 The Howl of the Wolf Tone: Void Harmonics and Occultizing Entropy

Jasmine Shadrack is a Senior Lecturer in popular music at the University of Northampton. Her research areas are extreme metal, autoethnography, feminist psychoanalysis, performance and sound studies, and trauma research. Her monograph Screaming the Abyss: Black Metal, Sexuality, Subjectivity and Sound will be published in 2020 through Emerald Publishing.

The Howl of the Wolf Tone: Void Harmonics and Occultizing Entropy

Wolf tones tend to be characterised as unwanted octaval pulsing resonances in orchestral music found on stringed instruments. There is considerable literature on how to avoid or get rid of them, even equipment that has been created to eliminate them from performances and recordings. Allure and the plurality of notes caused by wolf tones obscure the designated notation from being heard in a pure form as these accidental harmonics cry across Ebs and G#s, screaming and lamenting over the purposeful and desired notes. It is this undesired liminality of sonorous wailing and destructive capability that imposes itself upon the intended. These howling wolf tones are not unwanted. Black metal has tended to embrace their abyssic qualities as their otherness and sonic representation of the void offer a door into the unknown, sonically and performatively. Black metal’s preoccupation with the occult, in ritual and performance is well documented from bands such as Mayhem, Behemoth, Darkthrone and Denigrata that demonstrate what the occult sounds like to its adherents.

Through the wolf tone’s disintegration of the pure form, the fragmentation from the perceived stable structure of the major arcana figure of The Tower, whose crown has come to represent the legacy and heritage of materialist tradition, Western musical canons too, sit upon those lofty turrets, cradling assumptions of ‘this is the way things are done’. Those that embrace the wolf tone, pluck at the building blocks of those traditions, causing The Tower’s foundations to shake. It is a breach, a sudden destructive revelation that undermines sonic expectations and societal supposition; the oracles hide within the cracks…

Extending this notion to ritual practice in the occult and witchcraft, the void of course is a period of emptiness as ‘the moon completes its final aspect with any planet in the sign it is passing through and ends the moment the moon aspects a new planet in the new sign […] some believe that working magic during this time will yield, at best, no results and at worst chaotic and unpredictable results’ (Kay, A. 2015). This unpredictability mirrors the way wolf tones function sonically, their ability to create entropic results similar to witchcraft’s knowledge of the moon phase as void and black metal’s embrace of both. These work together to harness The Tower’s liberation-through-destructive influence to produce anarchic, anti-hegemonic art-forms. This paper seeks to connect composition in the void of course with the sonic abyss of black metal’s wolf tone as the occult representation of The Tower’s destructive principle.

Ritual Occultation and the Space between Worlds: exploring the application of the “flow” state in Pagan and Black Metal performance practice.

This presentation examines the concept of the “flow” state and applies it to Pagan ritual workings and black metal performance. The flow state is “the holistic experience that people feel when they act with total involvement” (Csikszentmihalyi, 1975, p 36). It is a liminal state of consciousness (Turner, 1974), and is induced during ritualistic performance in Pagan and black metal contexts. These disparate praxes reveal through their shared aesthetics, a realm through which transcendental performativity is delivered.

The transformative powers offered by flow, advances a spiritual engagement with black metal. Pagan symbology when applied to black metal performance leads to adoption of the flow state. Pagan ritual workings are a mental operation where the practitioners raise energy, imbue it with a purpose, and then send it out to its intended target. This work cannot be conducted in an ordinary state of consciousness; an altered state must be realised to craft the singularity of intent necessary (Adler , 1986; Orion, 1995; Starhawk, (1986). Pagan ritual is understood as a form of performance (Butler, 2004; Hume, 1998; Roundtree, 2006) with emphasis on set and setting, and ritual tools considered as props. This staging aides the Pagan as performer to achieve and maintain the altered, liminal state of flow.