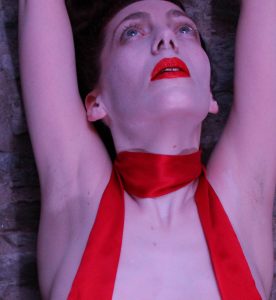 Mantic Visions and the Subtle Eye of Matter

‘Vision is through the veil, and inescapably so.’

Esoteric or occult knowledge is revealed in revelatory episodes, in mantic visions that are felt to descend on us when we are engodded, or, when dreaming or enraptured, we are transported to a visionary realm.

It is through the mediation of the body that the invisible makes itself known to us.

I will consider the dark senses of touch and kinesthesia and their synaesthetic involvement with vision, how the tactile kinaesthetic awareness of the living body is in continual conversation with the visual.

I propose that we think of a continuum of embodied states between incarnation and excarnation, from out of body and near death experiences to the weakly embodied dreaming and psychedelic states to the immersive deep embodiment of possession and performance. To each of these states belong distinctive modes of seeing.

These perspectives are drawn from my experience of creating dance; working with dream and visionary states to support movement explorations throughout the choreographic process, and in the translation and transfiguration of images into flesh in performance.

‘Mantis, this landscape is hidden from all but the most holy eye.’

(The Book of Going Forth by Day)

The dance is intended as a chorography of this landscape, and a glimpse of its elusive numina, revealing through the body a clandestine vision of the divine: the visitation.

I am developing the choreography through an experimental process inspired and directed by the affective mysticism of Thomas Gallus, through visionary experiences and entranced, engodded states sought through movement and entheogens, in dreaming, and in a series of ritual workings with Venusian spirits. In process, and in performance, I ask how we see and make visible what is hidden. I consider the body as a place of seeing (theatron) and as the place of the god/dess (theos/thea), and the dancing ground as a space within our commodified, secular culture where the sacred and daimonic can reveal itself.

Where the daimon dwells: A choreography of the space between

I will explore the liminality of performer and performance space, and their relationship in presencing the invisible reality – the other, sacred or daimonic.

In his final extant letter, written on 24th February 1948, Artaud resolved to devote himself to:

a theatre of blood
a theatre which with each performance will have done something
bodily to the one who performs as well as the one who comes to see others perform
but actually
the actors are not performing
they are doing.
The theatre is in reality the genesis of creation.

Performance potentially generates a space for materialisation, for transformation and for the dissolving of boundaries. Movement itself engenders this transfigured space, and makes it visible to the eye and tangible to the senses. In this presentation I will trace the relation of this interstitial space with the dancing body, grounded in an aesthetics and kinetics of the interval. I will discuss the techniques of trance and transformation as a method of presencing the Other, in space and in the body; and chor(e)ography as an art of crossing the threshold, where the daimon dwells.

Alkistis Dimech will giving an exclusive solo performance. She has written a short piece that contextualises her performance here: http://sabbaticdance.com/corpus/arax-scorning-bridges/