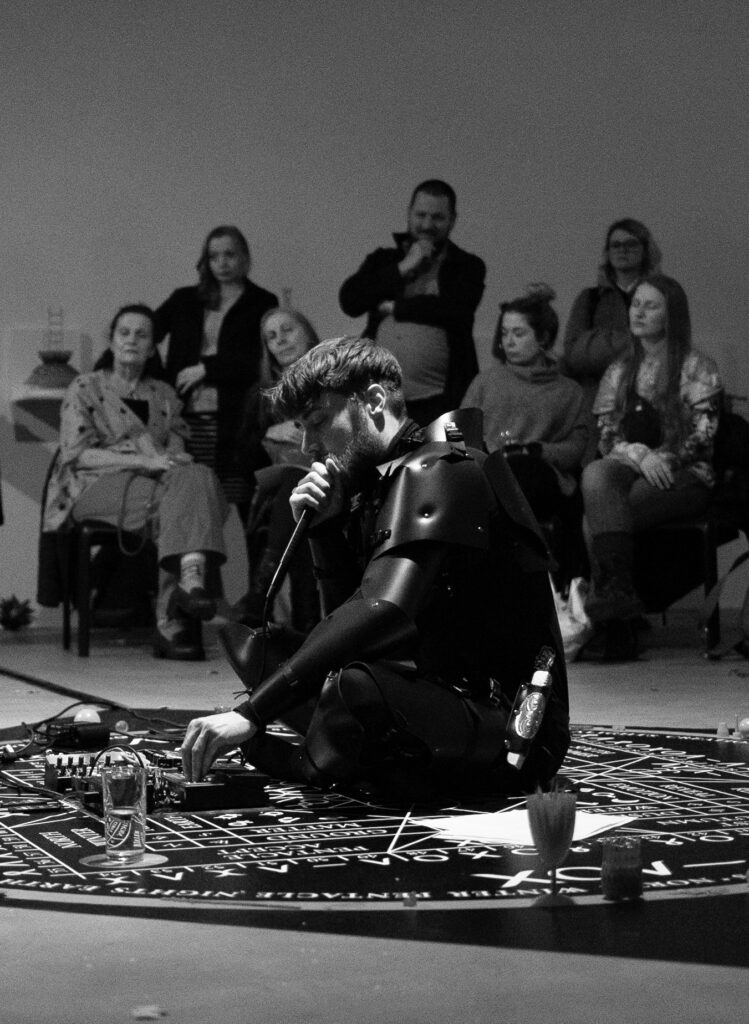 Ben Jeans Houghton’s multidisciplinary practice spans sculpture, installation, film, drawing, painting, writing & performance. Through these media he investigates magic; the art of transformation and its methodologies, technologies, agencies, and implications, through art-praxis, as-gnosis, informed by astrological, philosophical, and metaphysical perspectives. The work encourages a timely remembrance of occulted metaphysics and methodologies, whilst dismantling the monopoly of the materialist paradigm, towards the reinvigoration of contemporary creative tools, for the forming of positive futures based on mutual flourishing in right-relation with a more-than-human cosmos.

Jeans Houghton works experimentally by creatively engaging with the theory and practice of magical methodologies: Through performance, he engages with ritual costume, sculptural tools, set and setting, oration, and mantric glossolalia; to both orient, explore and express the creative praxis of transformation and the agency it affords us. Through drawing and painting, he gives form to impossible objects, imaginal anatomy, and the phenotypic entities that populate the tundra of Terra Incognita. Through sculpture, he creates non-denominational haptic expressions of votive-worship, that evince the alchemical methodology of using art-praxis to both communicate and co-create self-reflexive, transformative opportunities, for the author and audience. Through writing, he engages with the poetic economy of prose to intimate the historicism of foundational ideas and reanimate their essence. Through experimental film and film essays he creates oneiric time-based expressions that subsume the structures and visual languages of mythology, anthology, poetry, and essay; to communicate a constellation of perspectives that explore, establish and express extant contexts by embodying perennial questions, posited in novel ways, as the ambulation of a gnostic-psychogeography.

This presentation of practice-based research invokes an artist whose trans-conscious-ethnographies revealed the xenomorphic-genus of Terra Incognita. I present through the generation of language and image an auto-ethnographic, chronological exploration, of my own oneiromantic relationship to the channelled embodiment of this plutonian-psychopomp. I mean to illuminate something of the magician’s gnostic capacity to world-the-shadow; to reveal the transpersonal-panspermia of celestial, terrestrial, and infernal realms; contextualised-with and focused on the scorpionic archetypes and imaginal-ecologies of an astrological metaphysics.

This atavistic experimentalism is an explorative attempt to embody through praxis a visionary invocation of Giger’s shade-as-guide, akin to Andrei Tarkovsky’s Stalker; A figure whose ambulation permeates the boundaries of an imaginal-zone of profound and perilous psychic portent.

I mean to track Giger’s atemporal resonances, whose inception ever-dawns and ever-dusks, from an ethereal event horizon beyond the ecliptic that feels equally ancient and futuristic. The images I present, arrive through my own generative trance-based encounters with the embodied-genitalia of scorpionic imaginal-ecologies. This möbius procreation of my own ritually channeled paintings is generated in-relationship-with writing; that both inspire it and are inspired by it.

This self-reflexive auto-ethnographic odyssey navigates an exploration of my own magical experiences through arts praxis: A plutonian initiation into Giger’s world at 10 years old. Ecstatic states aberrantly reached through the organised brutality of intensive gymnastics training at 12. A skull fracture that rewired my thinking at 15. A decade of nightly ‘Night Terrors’; awakening into an eternal, infinitely folding moment of total negativity. The manic-channeling of an Astro-magical system; describing the processional nature of transformation at 33. Giving consent to the gnostic-terror of being at 36 and opening an atemporal door to the fecund-tundra of the shadow at 37; from which the imagery I will present here arrived to communicate itself through me, in an act of cosmo-coital-co-creation.

A gothic-exoskeleton of black ceremonial armour, at once ancient and futuristic, organic and artificial, is worn to enable the artist’s oneironautic immersion, through this non-denominational, devotional ritual.

This encounter unfolds atop a retrofitted rectangular flight case, splayed open as a book. One side is divided between a light box, topped with a sheet of opaque white perspex – as a frozen pool of glowing milk, alongside a twinned rectangle of black perspex – as the protean oil of unremembered flora and fauna. Secreted contact microphones amplify the arrival of combinations of objects arranged on these surfaces. The other side of the flight case houses a pedal-board of audio electronics, alongside a cornucopia of chromatic objects, whose individuality will come to populate the brief collectivity of the arrangements displayed.

This ritual performance is a möbius unfoldment, that persists through a dismembering and remembering of non-human fetishes, as transient artefacts of ambiguous presence. Briefly enthroned and engodded through haptic-hymns to votive flux. Each object exists in entwined and dislocated relationship to the esoteric technē of the body that moves them, and the hands that orchestrate their agency as alchemical apparatus. The delicacy and aesthetic pragmatism of refined ceremonial formality, enunciates the intuitive choreography of their arrangements.

The performance invokes the transient magician whose arrival briefly punctuates the normality of locality with luminous moments of non-understanding, through obfuscation and revelation alike. Each object at once invokes referents, collective and individual, that mirror the particularity of each mind’s idiosyncratic cognition’s search for and generation of meaning and its absence.

A psalm to the numinous non-human eroticism of being, to give voice to the mouthless things, is voiced over and under, through the improvised intonation of mantric glossolalia, prose, and poetry.

After spending time with Phaidon’s Giger retrospective, I began a process of being with him through digital painting. I assumed I was drawing these entities into being, but as they became clear I got the overwhelming feeling of being watched by them as they dressed themselves in my imagination.