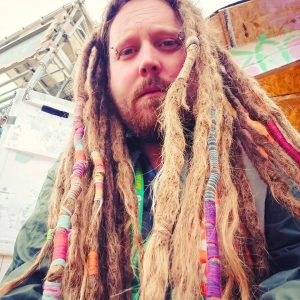 Cavan McLaughlin is a Senior Lecturer in Media Production at the University of Northampton, with research interests related to the role and function of occulture. He has published on Crowley, solar symbolism and narrative, open source occultism and contemporary occulture. Currently undertaking a PhD entitled ‘Occultural Production as Re-visionary Mythmaking’, he is also a practicing filmmaker, artist and all-round creative media practitioner. As a media professional of over sixteen years, he has been involved in almost all aspects of audiovisual production, specialising in promotional music videos and album-sleeve artwork. He is the founder of Trans- States (www.trans-states.org) and co-founder, and editorial board member, of Monad: Journal of Transformative Practice (www.monadjournal.com). He has a profound affection for cows, fungi and rainbows.

The narrative structures of our codified culture are a valuable and essential part of our evolutionary development. For all the good (and, of course, the ill) they have done in proliferating our species and maintaining cohesion, direction and social order, it is important to note the extent of serious trauma that has arisen from many of these socially-sanctioned narratives. Blake’s “mind-forg’d manacles” do not only imprison one within their own interior landscape, but our (now hyper-networked) society’s language systems entrap us within a culturally-constructed discursive environment.

Whether knowingly or in ignorance, our codified culture and those that author it, can wield narrativity like any double-edged technology: to liberate and to heal, or to beget bondage and trauma. The power of authorship then, hangs heavy above us all, like a great sword of Damocles. Re-visionary mythmaking, the form of re-writing that this presentation will be primarily concerned with, is about (re)claiming that power, and when faced with oppressive and harmful narratives, ‘flipping the script’.

The concept of re-vision, introduced in 1972 by feminist poet and theorist Adrienne Cecile Rich, is a purposeful critical engagement through new eyes, as a new self, unfettered (or at least less fettered) by the limitations inherent in the language systems and cultural matrix that housed the previous self. “Re-vision—the act of looking back, of seeing with fresh eyes, of entering an old text from a new critical direction—[…] it is an act of survival.” (Rich, 1972).

Re-visionary mythmaking, is the re-codifying of culture, by reflexively rewriting the past within the cultural field of the present, in novel ways that demand active and radically critical re-readings that disrupt and break through existing societal and cultural programming—and in doing so, creating new possibilities for the future.