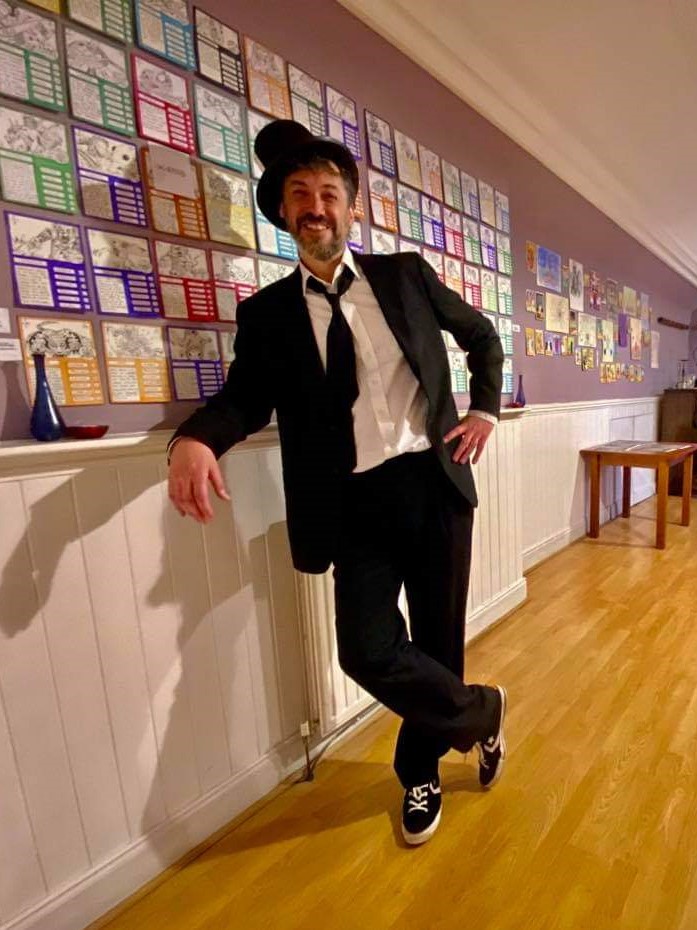 Dr Scott Jeffery is a lecturer, artist, and author of The Posthuman Body in Superhero Comics (2016). His latest publication, Difference, Repetition, and the Superhero Comic appeared in the collection Superheroes and Excess: A Philosophical Adventure (2021) and he was an artistic contributor to the recent Tool Box series of books providing creative games and activities for those in prison. Rumours that his role as keeper of The Fairy-Dog Calendar Count means he is an undercover warrior in the Lemurian Time-Wars are largely exaggerated.

Paper Presentation – Acid Communisms and Anarcho-Mysticisms: Notes towards a history of Re-enchantment as Resistance

The figure of the magician is one whose sleight of hand and word can confound and upturn the audience’s sense of “reality”. This paper explores this idea by blurring the lines between social theory and occulture.

Mark Fisher’s phrase Capitalist Realism described the ways in which the social and political imagination has become closed off to the possibility of other modes of life and social organization. By contrast, his later concept, Acid Communism, describes “a new humanity; a new seeing; a new thinking”.

Specifically, this talk would like to place the concept of Acid Communism within a wider Occultural context by mapping a brief history of what might be called Magical Marxisms and Anarcho-Mysticisms; movements where politics, art, activism and occultism have converged in a series of efforts to disrupt what Deleuze once termed the Control Society.

If Control seeks to make subjects of us, bound in the consensual hallucination of Capitalist Realism and its ‘slow cancellation of the future’, the movements discussed here linked altered states of consciousness with class-consciousness, activism and occultism, re-enchantment and resistance. Drawing upon a selection of historical examples, I want to map out an alternative history (and potential future) of Acid Communism by considering them as acts of deliberate ‘fictioning’; where myth-making combines with rituals and techniques that actualize new, collective subjectivities.

By drawing out these narratives we can reveal a history and a set of tools which demonstrate and encourage the possibility of (co-)creating new futures.

A “Memeplex” or “Just an Inch”?: Competing Visions of Anarchism, Magick and the Self in the Comics of Alan Moore and Grant Morrison

Perhaps because comic books have generally been ignored by mainstream cultural critics have always been a rich source of occultural expression. This paper expands on this premise to discuss the works of Alan Moore and Grant Morrison, two of the most influential comic book writers who share some remarkable similarities as well as some crucial differences. These two authors’ trajectories, if not intertwined, then at least overlap enough that their antipathy for one another is well-known, but comparing their work and lives offers a unique lens through which to examine some wider concerns regarding the occult and countercultural ideologies. Both Moore and Morrison are practicing magicians who have both expressed an interest in anarchism as their political philosophy. Both authors have produced works that explore anarchist philosophy as well as works that are explicitly designed to function not just as comic books, abut as a magical spell on the reader (most explicitly Morrison’s The Invisibles and Moore’s Promethea). This paper explores the crossovers and bifurcations in the work and biographies of Moore and Morrison to illuminate the ways their lives and careers embody wider debates about the relationship between art and magic, occultism and politics, art and magic. The paper begins by laying out the cosmologies the two writers present in their collective oeuvres, before going on to examine how these appear to inform their political ideas. Paying close attention to the key texts of Morrison’s esoteric anarchist sci-fi The Invisibles and Moore’s V for Vendetta and Promethea the paper will end by focusing on the concept of the self in these works, and the competing visions of subjectivity, magic and anarchism the two authors offer.

This paper proposes a model of Tantric Transhumanism as a counterpoint to the dominant intellectual frameworks underlying much Transhumanist philosophy. Though it is concerned with the proactive enhancement of human bodies and minds with technology many argue that Transhumanism is an ideological descendent of the Enlightenment with its roots in rational humanism. Viewed this way, Transhumanism lends itself easily to both utilitarian and neo-liberal economic visions. While both the European Utilitarian model and the American Libertarian model both present as rational, materialist philosophies (albeit differing along ideological lines) there remain strands of Transhumanist thought that have a more problematic relationship with these very same Enlightenment ideals of rationalism and materialism. Never the less, a second strain of “irrational” Transhumanism which appears to betray a metaphysical or even mystical streak can be discerned.

This strain of Transhumanism runs through the Western occult tradition (indeed, the founder of Theosophy Madame H.P. Blavatsky was writing of the ‘post-Human’ as early as 1888). An alternative history of Transhumanism, which might be dubbed “Tantric Transhumanism” presents itself; one which takes in Crowley and contemporary chaos magick, as well as the transpersonal psychologies of Maslow, Groff and Timothy Leary. Tantric Transhumanism merges modern science and new technologies and archaic spiritualties in a matrix of mutual influences that cultural theorist Erik Davis attempts to capture with the term ‘techgnosis’. Tantric Transhumanism may be said to focus more on the transformation of consciousness rather than the body or linear, ‘rational’, intelligence. As in the Human Potential Movement of the 1960s, which found archetypal expressions in the Esalen Institute, emphasis is placed on transpersonal and spiritual experience. Contemporary ‘trans-spirit’ research including a renewed scientific interest in psychedelics, meditation and the emerging field of neuro-theology all speak of the need to rediscover Transhumanism’s hidden history, with the hope of providing a corrective to the rational-libertarian discourse that currently marks its territory.