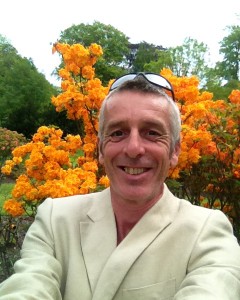 I have travelled extensively, visiting many remote areas in Africa and the Middle East initially in the early 80’s while working on irrigation projects and subsequently studying tribal beliefs in Darfur, Upper Egypt and Madagascar. This led on to an interest in Native American practises and a desire to bring these into a modern context. After qualifying as a Shiatsu practitioner (I also teach) in the late 80’s I was based in Northern California working with HIV positive people in Chinese medicine practises and discovered a Lakota Shamanka running Sweatlodges for HIV positive people with incredible results.

I propose to present an illustrated talk on The Sweat Lodge; it’s history, uses and how it works in a modern social context. Starting with the evidence of heat treatments from natural thermal springs and historical antecedents from Parmenides, Imhotep, Hippocrates et al in the near East city-states; looking at the evidence for use of hot stones for cleansing and purification in long barrows in Europe and elsewhere; re-appraising our archaeological view on group ceremonies of transcendence and transformation.

Some detail on the suppression of the Lodges in Native American post-colonial culture and how the ceremonies have re-emerged and are now being shared with other cultures.

I will explain how the Lodge is built and how its structure and symbolism are intrinsic to one another; how ceremonies can be adapted to the modern need for transcendence in a supportive group context. How important for us moderns to re-connect on the earth as equals and how the blend of elements enables us to transform our everyday perception to be outside ourselves and modern time. Connecting with ancestral practices.