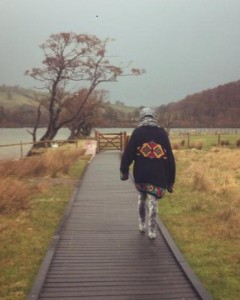 Georgia van Raalte is a PhD student at the University of Surrey, whose research focuses on the novels of Dion Fortune, and in particular their initiatory nature. She is also a writer, ritualist and priestess of the Temple of Our Lady of the Abyss, and has performed her rituals in the UK and across the United States.

This presentation will take the form of a piece of self-reflection, exploring the process of back-and forth between my academic studies in esotericism and my personal occult practice, and the rituals which have come out of this play.

I will begin by discussing my experiences of being an academic and a practitioner, and the liminal space I thus inhabit, seen by both academics and practitioners as being something ‘other’. I will explore the way that a liminal status is necessary for occult production. I will discuss my desire to destabilize the separation of academic and practitioner through my unashamed public-facing work that blends both categories.

I will then explore my work adapting the magical techniques describe by Dion Fortune, focusing on her pagan interpretation of the ‘composition of place’ method of St Ignatius of Loyola. I will describe the development of this method from a highly personal practice underlying the creation my first formal ritual, to using this same method in order to teach others its use in the public working The Equinox of the Bees,

I will then talk about the relationship between revelation, gnosis and the creation of ritual. I will discuss how I have worked with personal revelation in order to create ritual, describing the process of developing and distinguishing revelatory material, and what this has taught me about receptive magical practices such as mediumship and automatic writing. I will discuss the way that revelation and gnosis is both the experience from which ritual stems, and the aimed experience of participating in ritual. I will explain the source of this understanding in my work on Fon Fortune’s novels, which came from Fortune’s intiatory experiences, and aimed to create initiatory experiences in the reader. I will emphasise the necessity of taking occultural production seriously as a site of occult practice, and show how occult products can in and of themselves be sites and sources of gnostic experience.

Belgian photographer Alice Smeets and Haitian art collective Atis Rezistans created the Ghetto Tarot deck in 2015. A photographic interpretation of the Rider-Waite tarot deck, the images were created in the Haitian slums using only material the artists were able to find locally. Smeets chose the name Ghetto Tarot, hoping to stimulate discussion about poverty and privilege. Without trivializing poverty, she argues that it is important to recognise that the ghetto can be a place of happiness, spirituality and creativity. Christian Liberation Theology has begun to recognise this, and it is time the study of esotericism does too, for it is in the social margins that we find the occult still alive and productive.

The cards use symbols from the Voodoo religion to embody the meaning of the Rider-Waite deck. Crossing the line between Western and non-Western forms of occultism, the Ghetto Tarot confronts the colonial gaze. Taking the liminal political subject and projecting him to the realm of art, the Ghetto Tarot transforms an object of pity to one of enlightenment. As a performance of the occult, the Ghetto Tarot collapses the boundaries between art and life, between the sign and what is signified. In order to explore the boundary-breaking nature of the Ghetto Tarot I will follow the presentation of my paper on the deck a participatory tarot reading session, focusing on the theme of liminality and the collapse of the boundaries between art and life. An image of each card drawn will be projected for the audience to see, and I will ask audience members to contribute readings of the cards, based both on their prior knowledge and spontaneous intuition.