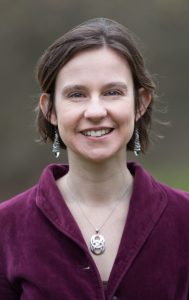 Dr Joanna Gilar is a storyteller with a PhD in ecological fairy tales from the University of Chichester. She is is co-editor of The World Treasury of Fairy Tales and Folklore (Wellfleet Press, 2016), and has been published in journals Gramarye and Marvels and Tales. She currently teaches online at Sharon Blackie’s Hedge School and works as a community storyteller, running projects for children and young people that aim to bring stories back into our bodies and our world. She has been a magical practitioner for 20 years, and has spoken and performed on storytelling and magic both in the UK and across the world.

From “Rapunzel” to “Sleeping Beauty”, heroines in towers populate our fairy tales. Imprisoned until they are rescued, they are held in isolated stasis, far from the fluctuations of normal life.  Yet, if we pay attention to the diversity of fairy tale history, these towers begin not so much to crumble as to sprout roots and wings. Earlier versions of Sleeping Beauty include the Irish Queen of Tubber Tintye, who guards a well of fire with the help of monsters of the earth, air and sea, as well as Scottish sorceress, Czech tavern-keeper and Norse valkyrie. In the Italian “Parsley”, the Rapunzel figure steals gallnuts from the heart of her prison, and turns them to a bulldog, a wolf and a lion in order to defend herself and her prince. The idea that fairy tales have at their heart an isolating tower and incapable princess is as troubling as the idea that the stories themselves should be isolated from the complexity and diversity of cultural and environmental context from which they emerged.  This paper will explore the tower symbol within “Sleeping Beauty” and “Rapunzel” to argue that both heroines and their stories are embedded, agential beings whose isolate towers of stone and paper are both powerful and non-existent.