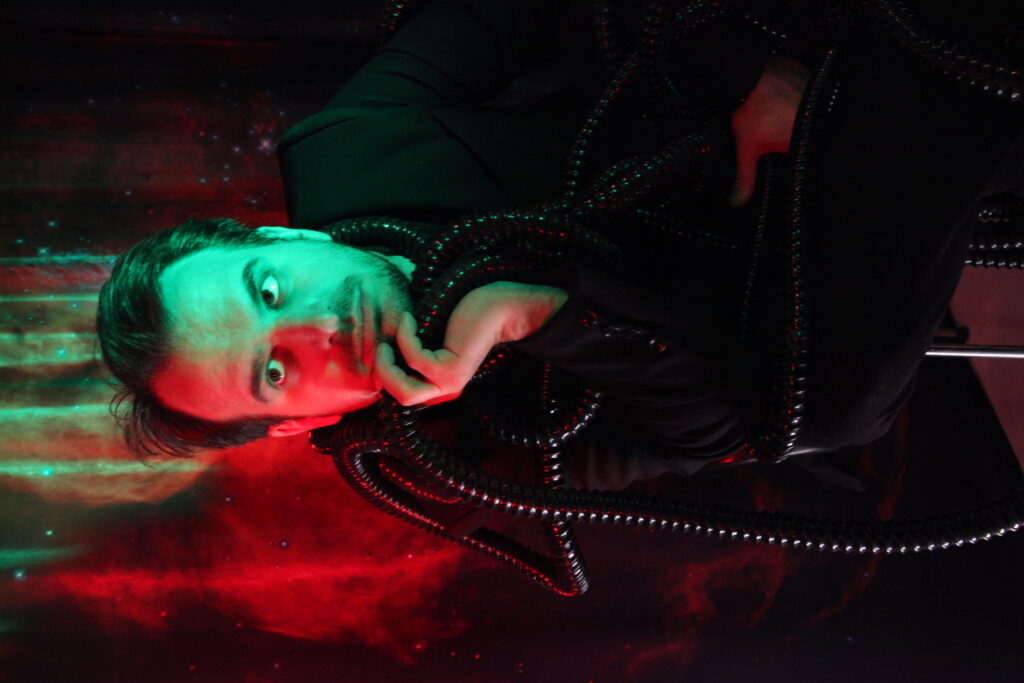 Levin Handschuh is a theatre director from Hamburg, Germany, and specializes in performance art and opera. His works have been shown at Theater Bremen, the Gelsenkirchen Opera, Theater Hof and the Bavarian State Opera, as well as the Wave Gotik Treffen in Leipzig. His productions are characterized by cross-over and mash-up aesthetics. Political activism and a ritual aesthetic form the foundation for many of his experimental works. Upcoming this season are his works “Tranceformation (Kinky Kafka)“, with his long-time collaborators XelK collective, and “Moondog vs Valentin“, which will both be produced with Theater Münster.

The history of magic and theatre is strongly intertwined: from the beginnings of shamanic rituals to medieval mystery plays to modern magic shows. What was once the shaman for early societies is now the artist for the modern masses. But many artists no longer have this connection in mind when creating. Theatre in particular stands at the crossroads between entertainment and social responsibility. The project “M/EAT THE ARBEITERKLASSE” (“working class”) from 2019 acted as a counterpoint to this development. Bertolt Brecht’s play “Saint Joan of the Stockyards” and Karl Marx’s “Das Kapital” served as templates for an expertly advised voodoo ritual mixed with doom metal and operatic singing. In this lecture, I will talk about the conceptual challenges of bringing magic into the theatre in a meaningful way and with social relevance and will show the results of this using the example “M/EAT THE ARBEITERKLASSE”. In particular, I’d like to address the issue of cultural appropriation that challenged the team since there were no PoC involved in this project, although the theme was voodoo. Video excerpts from the production with English subtitles illustrate the project for the audience. Furthermore, I’ll show more of my performances that have combined magic and theatre, such as “TechnoTarot” and the Lovecraft concert ritual “Native Outsiders”, which was performed at Theater Bremen.

M/EAT THE ARBEITERKLASSE (m/eat the working class) was a performance event at Markthalle Hamburg in September 2020. Inspired by German playwright Bertolt Brecht’s “Saint Joan of the Stockyards” (1959) it tackled the scandal surrounding billionaire Clemens Tönnies, owner of one of Germany’s biggest meat processing companies. The so called “Tönnies scandal” showed the abysmal conditions people had to work under at the meat factories, which resulted in rapid spreading of COVID-19 – a process sounding eerily similar to what Marx describes with the case of Mary Ann Walkley in “Das Kapital”. M/EAT draws from all these inspirations and compiles them into a voodoo-inspired ritual, where a diverse cast of performers and musicians comes together. And when the gods are called upon it is music that answers.