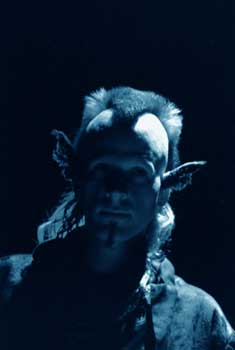 Orryelle Defenestrate-Bascule is an esoteric artist in many media, including painting, writing, sculpture, sound, film and performance art.

He is the writer-director of Australian-originating Metamorphic Ritual Theatre Company who have presented many major original productions based in (and updating/mutating) various ancient mythos; and the creator of the Tela Quadrivium book web from Fulgur (Conjunctio, Coagula, Solve, Distillatio) and The Book of Kaos Tarot (iNSPiRALink.Multimedia Press).

Orryelle is interested in the ensoulment of objects through aesthetic obsession; the merging of mental, spiritual and emotional relationships with creativity, in the vanguard of the current resurgence of the esoteric in art with its processes of re-enchantment.

The interplay of the figurative/representational and the abstract, the organic and ’synthetic’ (inc. the actual and the virtual) are aspects of these explorations, which aim to delve below the surface of things.
His current major project is the creation of a magical sculpture park at his ‘Le Chalet Crepuscule’ in the Ardennes forest, Belgium, where he is also holding ritual gatherings on some of the major Sabbats.

This is a presentation of recent multi-media praxis with the Ancient Greek God of communications, travel and magic. Hermes is evoked and invoked in a musical video piece timed to a song by Orryelle (violin, voice) and Antwerp electronic musician UrZon. The track will be released on the album ‘Esezezus’ to accompany the book of the same name to be released late 2022which also contains the poetic evocation of Hermes which is the foundation of the song.

A live performance will accompany and intertwine with the music-video in this presentation. I will alternately orate and sing some of the verses, while others will be pre-recorded freeing me to move (butoh and other such experimental dance forms) to the music. The performance will be an expression of the malleability of time and space (as Hermes’ domain/s, being both patron of travellers and psychopomp moving between the realms). Sped up movement in the video will often be accompanied by slowed down movement in the live elements, and vice-versa, to suggest a multi-dimensional flux of transcendent yet telluric travel.

Most of the video was filmed in Monsanto, Portugal where the ancient narrow cobbled lanes and monumental boulders around the old village houses (all topped by a spectacular Templar castle) provided an enigmatic atmospheric vista to move through. These labyrinthine streets as viewed from atop the mountain will at one stage be overlaid with computer circuitry which Hermes will also be running through in a more modern extension of the hyper-communicative realms of the Messenger.

A small bronze statue of Hermes will be in the exhibition for the duration of the conference.

A talk about the gnosis associated with the symbolism in The Blasted Tower tarot card (Arcana XVI) and how it relates to the fragmentation of language in the myth of the Sumerian Tower of Babel. Mostly a talk but with a performative aspect, this presentation will poetically (and with a mixture of profundity and absurdity) break down language itself as it progressively becomes a self-referential example of its own subject in multi-lingual glossolalic ecstasis:  The ecstasy of new tongues becoming flesh.

As the Word (made flesh) ‘Language’ itself comes from French Langue meaning tongue (the organ) they are really one, and can only thus be differentiated or split by speaking/acting with Forked Tongue (dividing the concept and its means). Yet the classic ‘forked tongue’ of the apparently deceitful (in christian mythology) serpent is in the physical actuality of the snake not an organ of speech but of pure vibration- snakes sense vibrations from sound using a kind of sonar by flicking their forked tongues out  -it is a receptive rather than active organ of sound/vibration. It is actually only humans who speak with forked tongue, for duality (the nature of language) begets lies, no meaning is one-pointed, absolute. Only pure glossolalia or wordless song -sound/vibration devoid of conscious meaning- is True.

Drawing also from Orryelle’s piece in Scarlet Imprint’s ‘XVI’ collection, the Tower as a symbol of human arrogance and its collapse in this age of ecological crisis are addressed.

The magical archetypes of Babalon and the Beast are also referenced, in relation to the Revelations of the Apocalypse (a word itself relating to ‘Unveiling’), including relevant verse from Orryelle’s transmission ‘The Book of Going Back by Night’  (Twilight Productions 2014).

Chess Symbolism and the Alchemical Marriage

Orryelle will be performing live at Trans- States, using voice and violin with loop and FX pedals in conjunction with the screening of his new Alchemical Chess film. The actual Alchemical Chess set (crafted of bronze, glass and clay) he will be using in the performance will also be on exhibit for closer inspection. Orryelle will introduce the concepts and symbolism involved in a brief talk preceding the performance.

There is a lot of Alchemical and Magical symbolism inherent in the game of Chess. It is my intent to bring out these esoteric undertones, and by making them more extant also transform the game itself and its metaphorical context in relation to our civilisation. It seems that modern western chess has become primarily a game of war -it is based on strategies derived from battles and is highly competitive. It does however have deep philosophical subtexts and was originally devised in India by a sage to give a king new insight into the profundities underlying social roles and interactions. The form of the game and many of the pieces has changed considerably since then. Here I aim not to change it back, rather return some of the magical symbolism but within a western as well as eastern esoteric context. The most obvious parallel between the game of chess and the quest of Alchemy is that it deals with opposites and duality, and ultimately transcendence thereof. What I discovered when applying alchemical symbolism to the set is that it transforms into a game of Love rather than a game of War. In alchemy the aim is to unite rather than conquer opposites, so all the dualities in the game are resolved and dissolved in sacred Conjunctio.