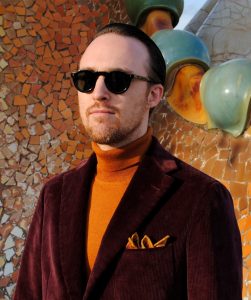 Per Faxneld obtained his PhD (2014) in History of Religions at Stockholm University, with the thesis Satanic Feminism: Lucifer as the Liberator of Woman in Nineteenth-Century Culture, (subsequently re-published by Oxford University Press in 2017). He has published extensively on esotericism in academic journals and books, and also contributed to exhibition catalogues from several art museums. One of his main research interests is the relationship between esotericism and literature/visual art. Faxneld is an associate professor/senior lecturer at Södertörn University, Stockholm. In his spare time he runs the bibliophile small press Malört, producing exclusive illustrated editions of historical esoteric authors like Jacques Cazotte and Stanislaw Przybyszewski.

The presentation will discuss ideas about Leonardo da Vinci and his famous painting La Gioconda (popularly known as Mona Lisa) that were widely held in both occult and non-occult circles during the nineteenth century: Firstly, that Leonardo himself was, in some sense, an esotericist (a notion there is no basis for in historical documentation from his own time). Secondly, that La Gioconda is a mysterious, sinister object (again, an interpretation reflecting nineteenth-century anxieties and fascinations, rather than something present in the original Renaissance context). To occultists, this object was moreover filled with magical energies, and contained hidden signs that the initiate could decipher and employ for his or her spiritual development. This “esoterization” of the painting and its creator was, the paper will demonstrate, part of a broader tendency to view artists, both historical and contemporary, as magicians and mystics in some sense at this time. Hereby, art became integrated into the endeavors of various esoteric groups and thinkers, and an originally secular Renaissance work like La Gioconda was absorbed into a nineteenth-century ”occulture”.

Bleed for the Devil: Self-injury as Transgressive Practice in Contemporary Satanism, and the Re-enchantment of Late Modernity

Using ethnographic method combined with analysis of primary sources like mass media appearances, song lyrics and websites, the paper examines ritualized self-injury in the Black Metal milieu. It is shown that this type of ascetic mortification is no aberration in the history of religions at large, yet diverges from older forms of Satanism. Self-injury functions in Black Metal Satanism as a symbol of transgression and virile bravado, and as a means to display allegiance to the Satanic cause by permanently marking the body. It is typically described by practitioners as a blood sacrifice to Satan. This ritualization of self-injury, where it is explicitly framed as a practice completely different from anything occurring in a secular context, is part of a broader endeavor in the milieu, which seeks to re-enchant a late modernity perceived to be devoid of spiritual values. Increasing mass media attention to self-injury, there postulated as a (secular) mental health problem among adolescent girls, has therefore lessened its usefulness as a sacralized and masculine transgressive symbol. This, it is argued, explains the declining emphasis on it in the Satanic milieu in recent years.