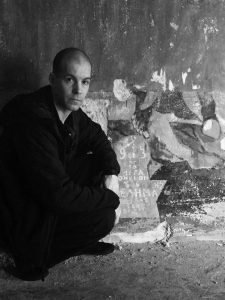 The Blood of the Saints

Peter Grey is a writer, and the co-founder of Scarlet Imprint. He is the author of The Red Goddess, Apocalyptic Witchcraft and Lucifer: Princeps. His collected essays with Alkistis Dimech will be published in the 2019 as The Brazen Vessel.

The Blood of the Saints

The blood of the saints is an account of a personal ritual process of engagement with, and deconstruction of, the apocalyptic imagery of Revelation 17:6, ‘And I saw the woman drunken with the blood of the saints, and with the blood of the martyrs of Jesus.’ Attention will be given to the vision of the cup and intoxication, the destruction of the world, and the mingling of prophecy and sainthood in John the Baptist. I go on to consider the centrality of the athletes of death, as well as sainthood and virginity in the eschatological hermeneutics of later Christianity.

The Revelation of St John the Divine is the lens through which Western culture has understood social, religious and ecological crises. St John’s vision has informed twentieth century occult discourse on blood and annihilation of self, and has inspired feminist readings and literary counter traditions. It is the symbol set that has created and will be used to language the anthropocene, giving impetus to the urgency with which their deconstruction must proceed.

My primary focus is upon the disquieting revelation of the source text and its antecedents, in particular the Enochic corpus, which are accessed through ecstasis. By returning to the source, which is understood as a point of origin but not final authority, the text is worked to produce not a singular formula, but a series of readings, a river of blood in which the world and our culture have been baptised.

The presentation is intended to be a hybrid of ritually accessed revelation and exegetic discipline that combines biblical scholarship with the insights of postmodernism and the actions of a practicing magician.