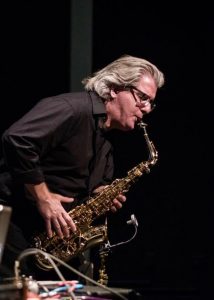 Many traditions understand sound as a particularly effective means of revealing the ineffable and the numinous. Given the potency of sound as a liminal substance, I have long wondered how modern music could be used to engage the symbolic potential of sound and create concerts that are essentially rituals. I found a solution studying the theurgic rituals of the third century Neoplatonic philosopher Iamblichus. Although the details of the rituals are lost to history, we know they included the recitation of divine names known alternately as nomina barabara (barbarian names), voces magicae (magical voices) or voces mysticae (mystical voices). Iamblichus explains that these were revealed by the gods and their power as divine symbols come not from their linguistic content but from their sonic quality. Because they have no semantic content – they are meaningless, but Iamblichus reminds us that what is meaningless to us is not meaningless to the gods. Despite transcending the limits of language, the voces mysticae do have specific syntactical arrangements, and syntax without linguistic content is music. Accordingly, I have used the voces mysticae as the basis of my music. To these I freely combined transformational techniques adopted from the Hebrew Kabbalah, itself a later monotheistic form of theurgy. These techniques include notarikon, replacing a single letter by a group of letters; temurah, patterned letter substitution (e.g. A→ Z, B→Y, etc.); and gematria, replacing a word by another word with the same numerical value. By replacing letters with musical motives these techniques not only generate effective musical material, but they also enable me to encode the voces mysticae and Kabbalistic relationships into sound. Thus the music is not just inspired by theurgy, it is a structurally theurgic. This presentation details these practices and is intended as preparation for my concert which itself is an imagined theurgic ritual.

Voces mysticae (2017) refers to theurgic ritual incantations. The first is named in honor of Abraham Abulafia (1240-1291), the medieval Spanish Kabbalist who used letter permutations as a tool to induce ecstasy. Akrakanarba is a magic word found in the Greek Magical Papyri, while Auioeoueei is a magic word I created myself. All of these words go through various Kabbalistic transformations, which generate the musical form and content of the piece.

The Chaldean Oracles (2017) is based on the second century (CE) collection of fragmented esoteric texts of the same name. They were revered by Neoplatonic philosophers and used in theurgic rituals designed to purify the soul and lead it to direct experience of the divine. The piece was composed using similar Kabbalist techniques already discussed and imagines a theurgic ritual: the Greek text is heard at the beginning of each movement; Oracle 112 is slow and introspective, the initial disconnection from normal reality; in Oracle 115 the music is faster and more frenetic, as though the initiate is beginning a wild dance; in Oracle 116 the initiate is crossing into a visionary realm as the music becomes more disjointed and weird – the text spoken throughout this movement is no longer Greek, it has undergone various transformations to produce new ecstatic incantations; the last movement includes three short oracles as the music again becomes frenetic, leading to the final ineffable vision of the gods.