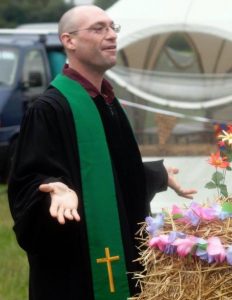 Writer, researcher and activist, Danny Nemu’s life changed for the weirder when a chaos magician taught him sigil magick twenty years ago. He encountered Daime when living in Japan and followed the trail back to its source in the Amazon, where the bite of a sandfly taught him more about the brew than most doctors of anthropology have articulated in their entire careers.

Danny is a professional palmist and hypnotherapist fascinated with the human mind and how to tap into its extraordinary and generally dormant potentials. He gives regular talks about ayahuasca, entheogens in the Bible, revelation in the history of science, linguistics and cognition, and academic prejudice against traditional knowledge systems. His books Science Revealed and Neuro-Apocalypse are out on Psypress UK.

Myth and plot, metre and rhyme,
Structuring life in space and time,
Lines of meaning cutting through it,
Ink on the page of the master poet.

In dreams, visions and compulsions, invisible intelligences communicate in the language of poetry, and when we call on our gods and familiars, we are answered in rhyme.

Describing my experiences of treating a flesh-eating parasite with ayahuasca, and the uninvited intervention of one of the demons of the Goetia into my life, this talk is about using Magick and Psychedelick power tools in occult dimensions to sculpt the goo that coalesces into daily experience. We will explore how formal structures influence the narrative of our lives: geometry in space; metre in time and myth; metaphor and plotline in the architectures of meaning. When that meaning collapses, and the Tower shoots forth what Crowley called its ‘lightnings of seed’, how is that creative potential channelled into a new structure that transcends the limits of what went before?