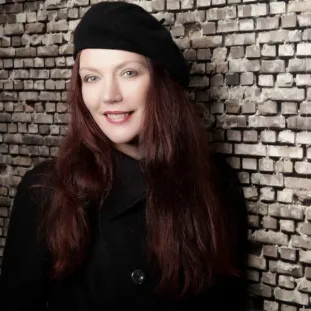 My research explores the intersections of photography and magic. I investigate the camera as a magical object, the photograph’s materiality, and how the photographic image can convey aspects of the magical imagination. Recent projects explore an aesthetic communication about how darkness functions in the mystical vision, particularly how the shadow can make the unseen appear tangible.

Mother Shipton was a legendary prophet, witch, and outsider. Stories tell she was born in 1488, during a violent thunderstorm in a cave on the banks of the River Nidd in Knaresborough, Yorkshire. Her predictions, first published in 1641, including the fates of several rulers, as well as the invention of iron ships, the Great Fire of London in 1666, and the defeat of the Spanish Armada.

When visiting the site in 2021, I became open to the possibility of history and legend revealing themselves. Using experimental photographic techniques, I decided to animate the stone statue of the prophet, which is situated in the cave. The illusion of motion is created in a single exposure, as Mother Shipton moves across the cave and appears behind a veil to summon visions of the future.

The photographic process transforms all it describes. It can change objects, images and ideas that contribute to their meaning. Similarly in witchcraft, magic is practiced to bring about transformation and sometimes objects are made or charged with magical intent for this purpose. During my recent artist residency at the Museum of Witchcraft and Magic in Boscastle, Cornwall I photographed one hundred magical objects including wax dolls, wands, statues, daggers, pendants, robes and amulets. I chose to photograph at night, enabling the objects to emerge from the darkness, where it is said magic begins. Reflecting on this process, I found parallels with photographic practice. Superstition and magic have encircled photography from the beginning. In many cultures, the word for photography/photographer translates as ‘soul taker’, ‘shadow catcher’, or ‘face stealer’. The camera itself was perceived as a magical object, and photographs were thought to possess supernatural powers, or be amenable to witchcraft. I became fascinated to explore how light and darkness define and articulate our relationship to enchantment and if this mechanism can be employed to suggest narrative and significance. Using torchlight for illumination provided a methodology that is open to chance and spontaneity enabling the imaginative possibilities of the object to assert itself. The results have prompted me to investigate further the blurred boundary between performance and ritual, and the production of art and occult practices. Of Shadows: One Hundred Objects from the Museum of Witchcraft and Magic will be published by Strange Attractor Press in 2016.