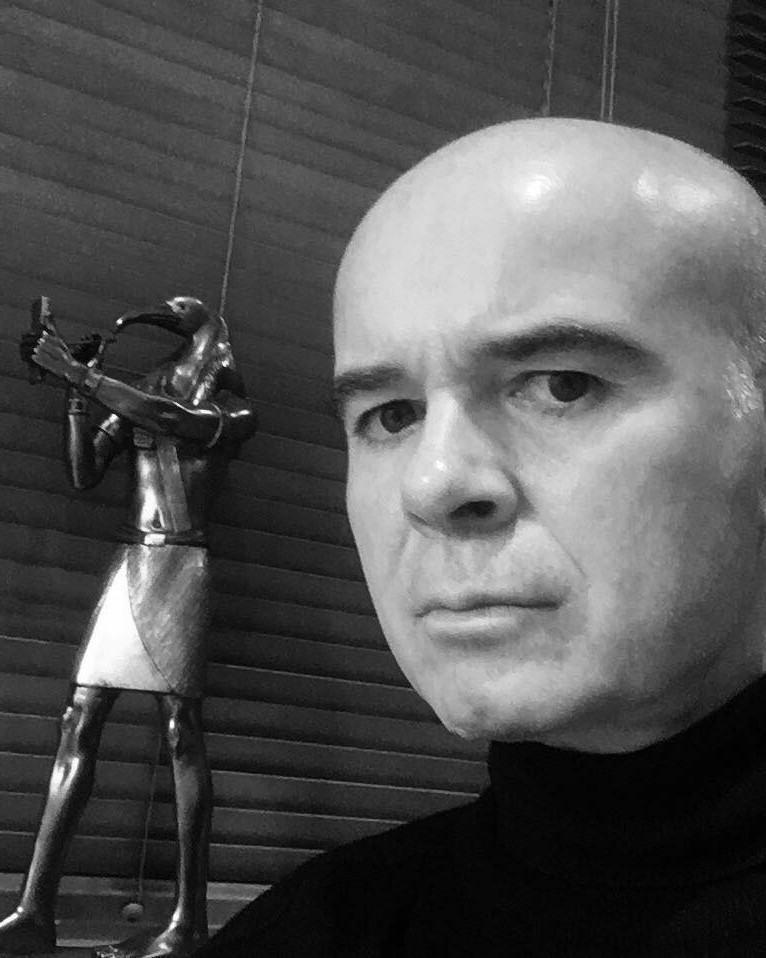 Dr Simon Magus BSc (Hons) MB BS MA PhD is a psychiatrist with a special interest in Early Intervention Psychosis. He studied medicine in London at Charing Cross and Westminster Medical School, now part of the Imperial College of Science, Technology and Medicine.

After qualifying, he taught Anatomy as the Royal College Prosector to the Royal College of Physicians and Surgeons of Glasgow, and as an associate lecturer in Anatomy and Embryology at the University of Glasgow. After initially following a surgical path, he changed to psychiatry in 1996.

Simon’s interest in esotericism predates his medical studies by a number of years. He completed an MA in Western Esotericism at EXESESO (The Exeter Centre for the Study of Esotericism), The University of Exeter in 2008/9. His thesis was entitled Austin Osman Spare and the Conquest of the Imaginal: Paranoia, Metanoia and Phronesis of the Magical Mind. His specialist field of enquiry currently centres on Victorian and Edwardian literary expressions of occultism, having recently published the book of his doctoral thesis Rider Haggard and the Imperial Occult: Hermetic Discourse and Romantic Contiguity, Volume 31 in the ARIES Book Series: ‘Texts and Studies in Western Esotericism’, Brill, Leiden Publishers.

Paper Presentation – The Triumph of The Magus: From Trionfi to Trumps / Gertrude Moakley’s Originary Tarot Hypothesis

In 1966, the American librarian Gertrude Moakley (1905-1998) published one of the first scholarly histories of the Tarot deck. In The Tarot Cards Painted by Bonifacio Bembo for the Visconti-Sforza Family: An Iconographic and Historical Study, Moakley presents a disquisition on her hypothesis of the origin of the imagery of the Tarot trumps. She argues that the sequence of the trumps represents the trionfi or ‘triumphs’ (‘trump’ and ‘triumph’ being cognate forms) of the processional cars of the yearly Carnevale parade before the Duke of Milan. This paper considers Moakley’s hypothesis in some detail, and situates it in the wider context of what I have termed the dramaturgy of Archetypes. This broadens the compass for the origins of Tarot imagery to include characters and scenarios from the Mystery Plays, and draws parallels between the pageant wagons which were deployed for the latter in Medieval England, and the trionfi of the Milanese ducal processions. In the dramaturgical arena, it also includes the evidence for character-inclusion in the Tarot from the Commedia dell’Arte.

The paper further contextualises Tarot imagery within the Weltanschauung of Renaissance Italy, notably in terms of the astrological ethos, and modus operandi of the Duchy of Milan. In this historical topos, it explores the possible causal relations of the emergence of the divinatory function of the Tarot. It elaborates upon the astrological purview of Milan, in order to examine the philosophical corollary a propos the persistence of Neoplatonic thought, especially with respect to the Platonic εἴδωλον (‘eidolon’/image), through the Aristotelian Scholasticism of the Medieval period, to its resurgence in the Milanese Renaissance. In this context, it considers the imbrication of the imagistic flux of the Tarot with the dramaturgy of Archetypes.

The Eye of the Heart: Mysticism, Sacred and Profane, in Literary and Clinical Intersections

In keeping with the theme of the conference, and transdiscplinarity in particular, this paper examines the vexed question of the ‘authenticity’ of mystical experience by comparing the historical tradition of the autobiographical drug experience with the ‘ecstatic confessions’ of the mystic.

To do this I draw on the dialectic of two paired volumes which were written in response to each other. Firstly, Thomas De Quincey’s Confessions of an English Opium-Eater (1821), in conversation with which Charles Baudelaire wrote Les Paradis Artificiels (1860), part of which is a translation of the former into French; and secondly, Aldous Huxley’s The Doors of Perception (1954), in answer to which Robert Charles Zaehner wrote Mysticism Sacred and Profane: An Inquiry into some Varieties of Praeternatural Experience (1957). Deploying these dialogues as a backdrop, I shall attempt to elucidate and categorise the nature of these experiences in the light of the psychopharmacology and phenomenology of opiate, cannabis, lysergic acid, and alcohol use, and the phenomenologies of mystical experience and psychosis. I conclude with some comments on the recent therapeutic turn in the medical use of cannabinoids, and the commencement of trials for psilocybin use in a therapeutic context. The paper facilitates the elucidation of some ontological and epistemological aporias arising from the use of such varying signifiers as the psychedelic, the psychotomimetic, the entheogenic, and the therapeutic − terms which are analysed as being culturally embedded, semantically contrasted, and contested.

The Place of Snakes or Seraphs?: Schizotypy, Esoteric Hermeneutics and Παράνοια

In 1902 William James enquired in The Varieties of Religious Experience as to the reasons why some individuals found the magical and mystical in their experience of alterations in consciousness, and why some found madness: the place of seraphs or the place of snakes respectively. In the following paper I shall explore the relationship of kinship between what I shall call for convenience the ‘magical’ mind-set and the ‘paranoid’ mind-set.

I shall deploy Antonie Faivre’s original criteria for esotericism which although criticised for a long period in the Academy are now being re-evaluated in terms of the original notion of a ‘mode of thought’ − associated with his concept of l’aire de famille to denote the compass of esoteric literature − and compare these directly with the diagnostic criteria for Schizotypal Personality and Disorder as described in the DSM V and ICD10 classifications. Central to this discussion is Gordon Claridge’s original concept of schizotypy in the normative personality, and its emphasis therefore explicitly avoids pathologisation. To illustrate my arguments empirically, I shall deploy a number of clinical vignettes of case studies to illustrate the commonalities and differences between the ‘magical’ mind and the ‘paranoid’ mind, without reducing one to the other in either direction. This is in keeping with the ‘Trans’ theme of the conference as it focuses on the importance of transdisciplinarity between psychiatric and esoteric studies: I shall employ imagistic representations of the ‘mad’ and the ‘mystical’ as an important emphasis of the presentation. This approach attempts a comparative phenomenology of psychosis and quasi-psychotic phenomena as described in the language of descriptive psychopathology with that of the experience of magical and mystical praxis as documented by esoteric literature and hermeneutic methods.